Whitney Stakes 2015: Jockey Legends, Fashion Saturday, Win And You’re In- This Saturday, August 8, Saratoga Race Track will host the 2015 Whitney Stakes. The 2015 Whitney Stakes is a Grade I race for three-year-olds and up and is run at a distance of 1-1/8 miles for a large $1,250,000 purse. The Whitney Stakes is one of the premier races for older horses, and it is one of five stakes at Saratoga on Saturday, which are all a part of the Fasig-Tipton Festival of Racing. NBC will carry live coverage of the Whitney, a “Win and You’re In” race for the Breeders’ Cup Classic. Post positions were drawn for the 88th edition of the Whitney on Tuesday afternoon at 6:00 PM ET and are listed below. 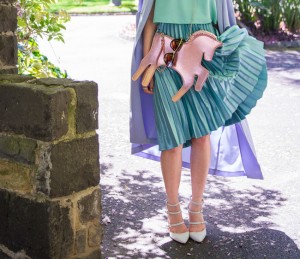 Fashion Saturday will take place at the Saratoga Pavilion from 11:00 in the morning until 6:00 in the evening. In order to look your fashionable best at Saratoga for the 2015 Whitney, try wearing pleats, a current major trend.
Photo: kisforkani.com

Before the 2015 Whitney, Saratoga will be hosting Jockey Legends Day, which will feature some of the most famous jockeys of thoroughbred racing who will be available to meet fans and sign autographs. They will be accepting $10 donations for autographs to benefit the Permanently Disabled Jockeys Fund.

Saratoga will also host its traditional Saturday event, Fashion Saturday. Fashion Saturday will take place at the Saratoga Pavilion from 11:00 in the morning until 6:00 in the evening. Local fashion retailers and spas will be highlighted, and there will be prizes for the best dressed man and woman along with a trophy presentation.

In order to look your fashionable best at Saratoga for the 2015 Whitney, try wearing pleats, a current major trend. Full skirts and fit and flare dresses are race day fashion staples, but add a trendy update and incorporate pleats into your look. Pleats can still give you a full skirt look, but they add a little bit of depth to your look. For the current trend, stay away from larger pleats, which can read a little school girlish, and try small pleats in fuller styles for a chic up-to-date look. The best part is that you can wear your pleats in any length; from mini-skirts to mid-calf to long maxi styles, they are all fresh and on trend. For celebrity inspiration, look to Taylor Swift, Alessandro Ambrosio, and Olivia Palermo.

Besides all of the fun festivities offered on Saturday, including all of the fun fashion, if you are able to come a day early, you can get ready for race day with Taste New York at Saratoga. This event is held on Friday nights at Saratoga at the Saratoga Events Pavilion. Track patrons can sample craft beers that exclusively hail from New York State Breweries. The event is held from noon until 5:00. If you can’t come early to Saratoga, then stay a day late and enjoy Taste New York Food and Artisans on Sunday from 10:30 a.m. until 5:00 p.m. Up to nineteen food and artisan vendors will feature goods exclusively from New York State at the Saratoga Pavillion. 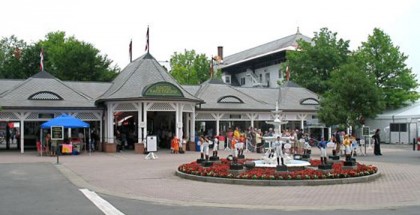