Updates on Kentucky Oaks 2016 Contenders: Terra Promessa rises to the top after the defection of Songbird. Fans looked forward to watching Songbird crush the Kentucky Oaks on May 6 at Churchill Downs, but with the star horse out of the race, bettors can now wager looking for a big score rather than skipping the event for lack of value. 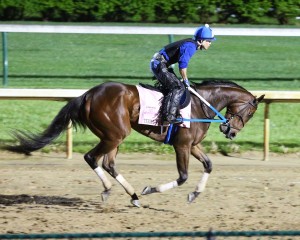 As for who will replace Songbird as the favorite, the popular Rachel’s Valentina will attract tons of attention and may challenge Terra Promessa and Land Over Sea for the role.

2. Lewis Bay (130): According to David Grening of Daily Racing Form, the Chad Brown-trained filly galloped over Belmont Park last Monday and was scheduled to ship to Kentucky the following day.

4. Weep No More (100): No updates are readily available. As an interesting fact though, the second dam Flute won the 2001 Kentucky Oaks for the revered Bobby Frankel.

6. Cathryn Sophia (80): The third-place runner in the Ashland Stakes suddenly became possible for the Kentucky Oaks. Trainer John Servis admits he changed his mind after Songbird withdrew from consideration.

7. Mo d’Amour (70): Princess of Sylmar’s connections (Todd Pletcher, King of Prussia) campaign this filly. Without Songbird around, an attempt at the Oaks seems probable.

8. Venus Valentine (50): The Congrats filly trained by Tom Amoss worked six furlongs in 1:11.80 on Wednesday at Churchill Downs. With Corey Lanerie expected to pilot Weep No More, it will be interesting to see who rides her.

9. Mokat (50): Now everyone wants a shot at the Kentucky Oaks! The connections made the Santa Anita Oaks runner-up a late nominee and will take their shot in two weeks.

10. Rachel’s Valentina (48): Most bettors expect the Ashland Stakes runner-up to attract more attention than Weep No More. The daughter of Rachel Alexandra recently breezed four furlongs in 48.60 seconds at Keeneland.

12. Dream Dance (44): Songbird’s defection brings this one into the mix as well. As a daughter of Afleet Alex, she will make the sire’s fans happy with an Oaks win.

13. Nickname (40): Just last weekend, the daughter of Scat Daddy ran a close second in the Beaumont at Keeneland and remains under consideration according to the Twitter handle @DerbyNews.