Whitmore Faces Distance Question in Kentucky Derby 142: Finding horses who lacked a route win coming into the Kentucky Derby (GI) and won would be a time-consuming task. Yet Whitmore, trained by Ron Moquett, will attempt to prove doubters wrong on May 7 at Churchill Downs. 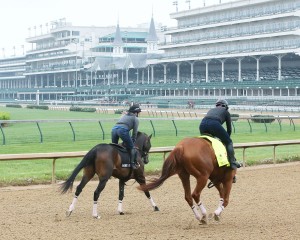 Whitmore, trained by Ron Moquett, will attempt to prove doubters wrong on May 7 at Churchill Downs.
Coady Photography

The son of Pleasantly Perfect then reeled off three straight graded stakes placings at Oaklawn Park, all in route events. He made the same impressive move on the far turn in each race, but could not finish the job.

For instance, in the Southwest Stakes (GIII), Whitmore looked home free after a big move approaching the far turn and looked clear, until Suddenbreakingnews mowed him down in the stretch. Whitmore made another nice rally in the Rebel Stakes (GII) around the far turn and found a way to run second again, this time to Cupid.

One race later in the Arkansas Derby (GI), after a grueling speed duel which set the race up for closers, Whitmore again made his patented move on the outside. His rival Creator saved a bit more ground going into the turn and outfooted Whitmore in the stretch. Suddenbreakingnews also passed Whitmore once more for second.

Whitmore owns four losses out of four races at a route distance.

On the plus side, Whitmore picks up Victor Espinoza who, in an incredible statistic, won five out of the last six Triple Crown series races. Jockeys dream of winning one Kentucky Derby, Preakness or Belmont Stakes and Espinoza eats them up for lunch. In fairness, American Pharoah and California Chrome were very talented horses. 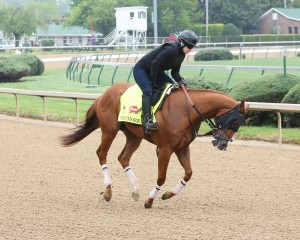 Few expect Whitmore to reach their levels, although no horse places in three straight graded stakes races without talent. The connections might change strategy too. Even though Whitmore ran from behind at Oaklawn Park, followers believe the connections plan for a more aggressive ride in the Kentucky Derby.

In fact, Moquett wished to be in closer range at the Arkansas Derby. According to the Oaklawn Barn Notes, “Whitmore lost position because of a ‘stumble’ and was farther back than expected.”

“There’s something to be said about our horse being in trouble,” Moquett said.

Whether changing tactics turns out to be the right strategy depends on the pace. The defection of Cupid hurts the closers. Still, speed horses such as Danzing Candy and Outwork remain headed towards the Kentucky Derby.

Outwork reportedly rated behind horses and passed them in his most recent workout. Sometimes horses run as speed horses during prep races and change tactics too (ex. Mine That Bird), which further complicates matters when handicapping the Derby pace scenario. Espinoza will need to adjust to whatever the situation demands.

Whitmore attracts a following and would make a popular Kentucky Derby winner. Questions about his distance ability remain though. In addition, predicting whether running closer to the pace will help and the presence of Espinoza are important factors to consider. Whitmore fans will see what happens in two weeks.