Trainer Liam Benson Has Life Figured Out: Knowing what you want to do for the rest of your life is a difficult task. Figuring it out before you even graduate college is nearly impossible. Not so for Liam Benson. 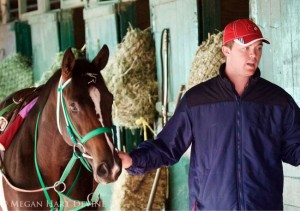 At age 20, Liam has already decided on and achieved his life goal of being a trainer. Photo: Megan Hart Devine

At age 20, Liam has already decided on and achieved his life goal of being a trainer. Nothing could dissuade him from his chosen career path, and his success thus far leaves little reason to even try to point him in another direction.

Horse racing has consumed the entirety of Liam’s life due to his family’s involvement in the industry. Growing up near Monmouth Park and then on a farm near Ocala, Liam grasped the basics of horsemanship in taking on the nightwatch duties of broodmares, handling yearlings, and working two-year-old sales. His current work has even stayed in the family as the horses in his barn are mostly homebreds.

“With my parents owning horses, it’s made life a lot easier,” Liam recognized about his early experience’s impact on his current success. “I got a leg up in that I got to work with all of it growing up.”

Upon entering the University of Louisville, Liam decided to pursue an equine business degree with a minor in finance and entrepreneurship. During his freshman year there, he worked as a tour guide at the Derby Museum alongside another rising star in the horse racing industry, Carly Kaiser.

It didn’t take long for Liam to land a job at the racetrack. He spent two weeks under Scott Blasi of the Steve Asmussen barn at Churchill Downs where he quickly accumulated knowledge of what it takes to be a trainer. He then had the experience of working at Taylor Made for two weeks as well, a special experience since it was there he was able to handle the New Mexico phenom Peppers Pride and Collect Call, the dam of sire Old Fashioned. 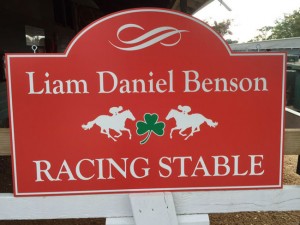 While many young people in the industry are unsure of their ultimate goals, Liam could not be more secure about his career choice to be a trainer.

In 2013, at the spry age of 18, Liam took out his trainer’s license at Colonial Downs, and his fifth starter collected his first victory as a trainer on July 4. Following his sophomore year, he spent the 2014 season at Monmouth, and this year he returned there with a group of six horses, four of which are two-year-olds.

Although Liam described the summer as slow due to most of his horses being juveniles and running later in the year, Expected Ruler quickly brought him triumph when he claimed the Tyro Stakes for his young trainer’s first stakes victory. A reserved but undoubtedly hopeful Liam plans on running the promising colt in Churchill’s Iroquois Stakes next, saying, “We’re going to see what he can do.”

A trio of horses will soon be accompanying Liam to his first Churchill Downs meet, and even though he’ll be laden with schoolwork as well, Liam plans on caring for those three horses on his own and only hiring an exercise rider. He certainly seems to have it all figured out: “I can go to the barn, walk them out, get them out to the track, and be in class by 9:30. When I graduate, sure I’d love to have 200 horses like Todd Pletcher, that’d be great, but we’ll play it by ear.”

No other job would suit such a passionate and hard-working individual. While many young people in the industry are unsure of their ultimate goals, Liam could not be more secure about his career choice to be a trainer, emphatically stating, “Oh yeah, absolutely!” in regards to being a trainer for the rest of his life. For Liam, the hard part of life is all figured out, and now he only has to enjoy the prosperity certain to illuminate his way.