Bal A Bali To Show Potential In Seabiscuit Handicap: When there’s talk of Bal A Bali, there are certainly mixed feelings. Some people think it is a miracle that he overcame a dreaded disease like laminitis and is still able to win races, whereas others are a bit disappointed that he has not yet transferred his Brazilian potential to the Northern Hemisphere. While both viewpoints are probably true, the way Bal a Bali overcame laminitis is laudable, and he has always been competitive in the United States and has likely not shown all his talent yet. 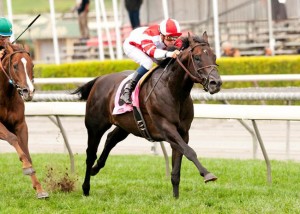 Favored Bal a Bali burst clear with a furlong to run and went on to a convincing one length victory in Saturday’s Grade III, $100,000 American Stakes at Santa Anita. Ridden by Flavien Prat and conditioned by Richard Mandella, Brazilian-bred Bal a Bali made an impressive U.S. debut as he covered a mile on turf in 1:35.69. Photo: Benoit

Even though Bal A Bali won his first race in the United States, the American Stakes (GIII), he lost two races in a row afterwards, finishing in fifth place in both the Shoemaker Mile Stakes (GI) and the Del Mar Mile Handicap (GII). After those unusual efforts, people fairly wondered whether or not Bal a Bali is real Grade I caliber in the Northern Hemisphere. It seems that hopes dissipated a bit, but two months of freshening and a step back in class have revived those same hopes. Bal a Bali outkicked his rivals in an allowance optional claiming event on October 30, at Del Mar, turning in a fast 1:33.70 for one mile. It could be argued that the race seemed like a listed stakes since horses like Big Cazanova and Texas Ryano were also entered in that race.

After witnessing Bal A Bali’s performance in that race, the horse looks ready to show his skills in the Seabiscuit Handicap on Friday, Nov. 27, 2015 over 1-1/16 miles at Del Mar. However, the race is composed of tough rivals with graded stakes experience.

Probably considered to be the class of the field, the shipper Seek Again is looking for his first win this year. However, three of his four races this year have been Grade I races, and he hit the board in all of them. The Bill Mott trainee is a five-year-old son of Speightstown out of Light Jib (GB) by Danehill and will be ridden by Jose Lezcano.

Trying to extend his winning streak, Alert Bay, a four-year-old by City Zip, moves down to SoCal from his Golden Gate home base. Even though he beat a weak field by just a nose in his last start, that race should be considered a solid enough prep for the Seabiscuit.

Not popular but effective, Avanzare is ready to bounce back after a bit of a regression with a third-place result in the City of Hope Mile Stakes (GII). After that race, Avazare’s connections freshened him to face this race on a two-month layoff. Avanzare has 7 wins in 14 starts, proving himself to be a very good horse who is always in the mix.

The keys of this race are the pacesetters, Midnight Storm and Macro Access (ARG). The first one is trying to get back to what he was – a good prospect with tons of speed – and the latter is looking to demonstrate that his upset victory last time was not a coincidence. Macro Access was considered a nice prospect in his native Argentina but disappointed badly in his first two races in the states. Five months later a first-time gelded Macro Access upset in an allowance, looking like the horse Argentinians were used to seeing.

Certainly, the Seabiscuit Handicap is a race that is going to show the true level of some horses and will define the stakes of the 2016 season. According to this writer, it’s only a matter of time before Bal a Bali shows his real potential and wins a Grade I in the U.S.