Majesto the Forgotten Horse in Kentucky Derby 142: Despite finishing a closing second in the Florida Derby (GI), Grupo 7C Racing Stable’s Majesto failed to attract the hype which follows some of the contenders heading into the Kentucky Derby (GI) at Churchill Downs. On May 7, because of his unpopularity, if Majesto can win or hit the board he will help bettors to generous payoffs. 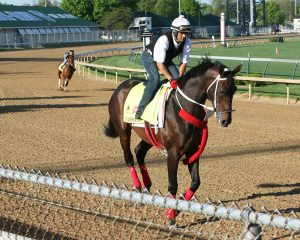 Trained by Gustavo Delgado, Majesto compiled a 1 for 6 record in his short career.

While Americans are less familiar with the trainer, according to the Gulfstream Park Barn Notes, Delgado “saddled four Triple Crown champions and five winners of the prestigious Clasico Simon Bolivar in Venezuela.”

In addition, some racing fans do not know Majesto’s record before the Florida Derby. Interestingly, in Majesto’s career debut at Belmont Park last October, he faced future Tampa Bay Derby (GII) winner Destin and only lost by a length after making a four-wide move on the turn. Breaking the maiden looked imminent.

In his next start at Gulfstream in December, Majesto actually took command of the lead turning for home before losing by less than a length. One race later, he failed to hit the board and finished sixth in another Gulfstream maiden race, which Gettysburg won, but the track favored speed. Throw the effort out.

Majesto made two starts in February at Gulfstream, and went back to hitting the board on Feb. 6 when he finished third, losing by roughly two lengths. He then put everything together on Feb. 27 and broke his maiden.

Handicappers may turn their heads at the slow progression Majesto made, but horses, and especially Tiznow progeny, sometimes take a while to develop. Majesto backed up his maiden win by finishing second in the Florida Derby to Nyquist, who many consider the leading 3-year-old colt. Yet, Majesto’s odds will probably stay above 20-1.

Critics also dismiss the strength of the Florida Derby field besides Nyquist, which might be a valid concern. As a sign of weakness in the field’s overall depth, Takeittotheedge made only one career start before the race and he ended up as the third betting choice. Mohaymen came into the race undefeated, but possibly was exposed.

If Majesto must overcome any trends, one in particular stands out. According to Keeneland Dan on Twitter, no horse since Smarty Jones in 2004 had four preps or more and won the Kentucky Derby. While Majesto’s only stakes attempt was the Florida Derby, he ran in three other races this year. Will that be too much?

Bettors can always backwheel Majesto instead of including him on top.

Indeed, backwheeling works well with closers because they hit the board more often than they win (tactical speed tends to win dirt races). While early in his career, Majesto seems like the kind of horse who will be able to compete against the best and hang around at the finish, but not win. Of course, early pace will help his cause too.

As another plus, Majesto looks like a beautiful horse. Watch him gallop over the Churchill Downs track on April 24.

A few days before, he also worked one mile in 1:44 back at Gulfstream Park West. Some handicappers do not like to see long, slow works before the Kentucky Derby though because the pace ranges from moderate to fast (so, in theory, a faster workout would help because it better prepares the horse for the race’s tempo).

Nevertheless, taking a chance with Majesto in the underneath slots might not be the worst idea.