Fort Larned took first place at the 29th running of the Breeders’ Cup Classic in California at the Santa Anita racetrack. Fifteen races took place over the two-day event with a total of $25.5 Million on the line making the Breeders’ Cup the most prestigious horse race in the entire world. 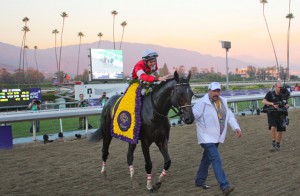 In Addition to Fort Larned’s victory, Little Mike and Calidoscopio had successful races at the 2012 Breeders’ Cup. Little Mike, with 12-1 odds, finished the Breeders’ Cup Turf with a $3 Million payday! Calidoscopio, is a nine-year-old Argentinean racehorse that took first place during a 1.75 mile marathon with 8-1 odds. Calidoscopio probably won’t be seeing the racetrack for much longer but I’m sure he’s made his team extremely proud.

Fort Larned was strong right out of the gate at the Classic. Four-year-old Fort Larned and jockey Brian Hernandez, Jr. finished first. The jockey celebrated his birthday in addition to his 2012 Breeders’ Cup Classic win. I placed my money on Mucho Macho Man who crossed the finish line in second place.

Below are race results for the 2012 Breeders’ Cup Classic: