Danzing Candy Wins San Felipe Stakes at Santa Anita: Halo Farms’ front-running Danzing Candy cruised to an impressive two length win under Mike Smith in Saturday’s Grade II, $400,000 San Felipe Stakes at Santa Anita. Trained by Clifford Sise, the lightly raced Kentucky-bred colt by Twirling Candy got 1 1/16 miles in 1:43.04 and picked up 50 Kentucky Derby qualifying points, assuring him of a berth in the Run for the Roses on May 7. 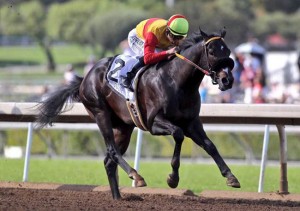 “He warmed up great, he was on his toes,” said Smith. “Our game plan was to put him on the lead unless he didn’t jump out of there well. We didn’t want to experiment…I left there very aggressive and he didn’t get away with anything (slow fractions). If you go 22 on this track today, you’re smokin’. And for him to hold off the caliber of horses he held off, was very impressive.”

“I expected him to be on the lead,” said Sise. “We didn’t want to experiment in this race. Mike just said, ‘I’ll let him come out the first few jumps and if he’s there, he’s there. If somebody sends, he’ll sit second.

“He (broke) much better today. He’s good now. We’ll stay for the Santa Anita Derby (Grade I, $1 million at 1 1/8 miles April 9). He’s three for three on this track. Why would we change now? I don’t see any reason to, but you never know. You’ve got to leave that up to the owners.”

Ridden by Gary Stevens, favored Mor Spirit appeared to get a bit rank around the Club House turn, but settled readily down the backside when next to last going past the half mile pole. With a cue from Stevens, he picked it up between horses around the far turn, rallied well, while within himself for second money and galloped out on terms with the winner past the wire.

“I’m very happy, because he was way too keen in the early part of the race, he was really fresh…” said Stevens. “He was super sharp. As I was coming into the lane, I knew I wasn’t going to catch the winner, but I knew we had to get some (Kentucky Derby) points. I like where we’re sitting for the Santa Anita Derby. I lost a battle today, but I like our position. Bob (Baffert) was happy, so I’m happy…He’ll settle a little better for me in the Santa Anita Derby.

Exaggerator, who is trained by Keith Desormeaux and ridden by his brother, Kent, was content to lag early and picked it up in eye-catching fashion heading into the far turn as he skimmed the rail, but he flattened out late, finishing three quarters of length behind Mor Spirit.
The second wagering choice at 2-1, Exaggerator paid $2.40 to show.

With the winner getting 50 Kentucky Derby qualifying points, the second, third and fourth place finishers earned 20, 10 and five points respectively.