Breeders’ Cup Mile 2014; Seek Again Seeking Wise Dan’s Title: The Breeders’ Cup Mile was shaping up to be quite a field, headed by the two-time Horse of the Year Wise Dan. After colic surgery and missing training time, Wise Dan still remained undefeated in four starts this year. Now, a fracture has sidelined the star once again. He is out for the rest of the year, but may be able to come back next year for another season, so long as he is able to compete at the top level. While Wise Dan won’t be shooting for a third straight Mile victory, there are several in the field that will be willing to take the title from Wise Dan. One horse has been a main competitor for Wise Dan this year: Seek Again. 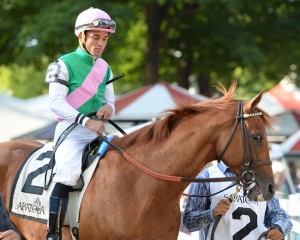 Seek Again, a four-year-old stud colt of Breeders’ Cup Sprint winner and sprint champion Speightstown, is a fierce competitor, who likes to come sneaking up the rail to nab victory at the wire.
Photo: Seek Again and Joel Rosairo, Adam Coglianese/NYRA

Seek Again, a four-year-old stud colt of Breeders’ Cup Sprint winner and sprint champion Speightstown, is a fierce competitor, who likes to come sneaking up the rail to nab victory at the wire. Beginning his career overseas in England, he dabbled in various distances, winning three out of seven races, and hitting the board two other times.

Coming to the United States to join the Bill Mott barn could be one of the best things to happen to Seek Again. In his debut in America, he upset the Grade One Hollywood Derby, at the now closed Hollywood Park. He would come back to finish a nose behind Wise Dan in the Grade 1 Woodford Reserve Turf Classic. The middle distances on the turf seemingly fit the son of Speightstown to a tee. He would come back in the Grade 1 Knob Creek Manhattan Stakes at Belmont Park. He would only manage third, after being fractious in the gate, checking in the stretch, and again was urged on between horses. He was also up against the long-winded Real Solution from the Ramsey Stables.

Seek Again finally reached the winners circle again in the Grade 2 Fourstardave Handicap at Saratoga. He was set for a rematch with Wise Dan, but Wise Dan skipped the race after missing training time due to his colic battle. Seek Again would beat a quality field in record time over the firm going. This set the stage for him to face Wise Dan in the Shadwell Turf Mile (G1) at Keeneland. Seek Again wouldn’t hit the board, which was the first time in over a year. After beginning his bid, he was checked sharply about a quarter mile from home, and was unable to regain momentum be the time he reached the wire.

Seek Again has yet to work for the Mile, but should be a force to reckoned with. He is likely to get back his winning ways, or at least, hitting the board ways. With the absence of his biggest competitor, Seek Again as a huge shot in the Mile this year. Juddmonte Farms and Bill Mott team up often, and this horses is a spectacle to be seen.
In person, Seek Again is very athletic, with a nice shoulder, and muscular hindquarters, which propel him during his one run attacks in the stretch. He is not exactly the tallest horse in the barn, but more of a delicate horse. He has the European look, unlike some of the American turf horses.

Seek Again has a pedigree that would suggest he could be successful at any distance on the turf. His entire distaff line screams turf, while his entire sire line screams dirt. He is inbred to Secretariat on the top with a double dosage of Natalma (dam of Northern Dancer) on the bottom. Seek Again is another sign that the Speightstown sire line over the Danzig sire line is one that consistently works. Seek Again is bred on similar lines of Jersey Town, Fast Bullet, and Delegation.

Seek Again in the Breeders’ Cup Mile, even across the board, is likely a smart betting choice. He could even go off as the favorite.

Christine A. Moore Millinery; A Must for Breeders’ Cup